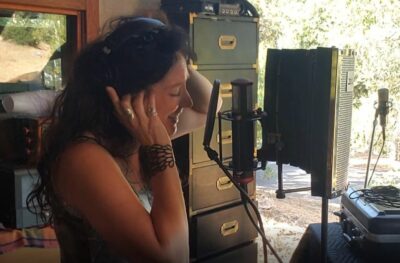 “The Man with the Child in His Eyes”

One of the most beautiful and beloved Kate Bush songs, “The Man with the Child in His Eyes” was written when Kate was a teenager, about her first boyfriend, Steve Blacknell.

“I wrote that when I was 16. I’ve got two older brothers and have always been in the company of older men. They seem to have so much fun and are able to laugh at themselves. I love that. It’s a song expressing that most men are really children at heart. (1979, Liverpool Echo)”.

When I polled my fans on which songs they wanted me to include on this album, this song came up in the mix. I had of course been considering it, but once I saw it in the poll results, it tipped me over the edge.

And it didn’t hurt that Alex McMurray played it stunningly beautifully.

We played and sang through it one time the day before the recording session started, and then one time in the studio.

I really wanted to capture the essence of the youthful innocence and wonder inherent in this song.

Here is an excerpt for you.