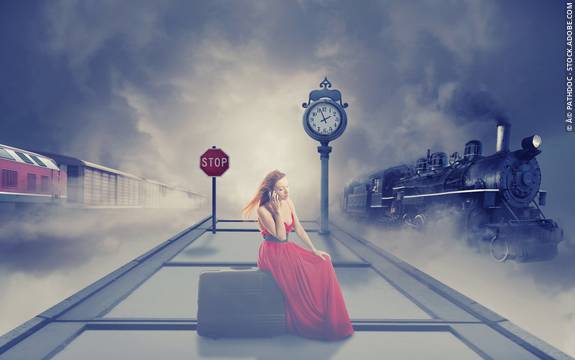 This song, The Train,  was probably the hardest song of all the new material on my third album to write and bring to fruition.

I had a very clear inspiration of the theme I wanted to write this song about, as well as a very clear intention as to the type of groove I was feeling and hearing, but when it came time to sit down and start writing the lyrics, I started writing a bunch of stuff that was simply rubbish.

It was one evening, when I decided to just go out into the garden at dusk and let something just come to me, that I made a breakthrough. I realized that even though I knew this song was about linear Time and mortality versus spiral Time and creativity, I was being too linear in my thinking about how to write the lyrics.

I had an insight to look at the metaphors that were embedded in Lewis Carroll’s “Through the Looking Glass”, since this song was also about my own dream symbology of trains. I soon learned that the rushes in the water in “Through the Looking Glass” were symbols of the dream state, and all of a sudden, I had my starting off point for this song. . . imagining myself pulling those same rushes from the water (which is a symbol of the unconscious) to begin the world where this song takes place.

And once I discovered that, the lyrics started flowing freely, and the story of the song unfolded right before my very eyes.

In these studio excerpts you will hear this song in its final stages, looong after Fran Vives and I spent many weeks and hours crafting the entire song’s groove and arrangement, and I spent many hours laying in the vocals and rewriting the melody over and over again.

After that work was done, I hired Maurice Dickson, a Celtic banjo player from Ireland, to record Celtic banjo and Bodhran drums, and he in turn introduced me to Riverdance music director and Irish session musician (EG: Van Morrison) Declan Masterson (also from Ireland) to contribute his Celtic whistle parts.

Here, you will also see my mixing master and bassist Ray Schaeffer laying in both his fretted and fretless bass parts as we piece this song together.

And I believe in this song now more than ever. . .