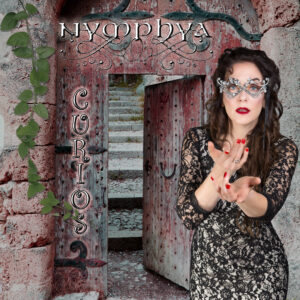 “I expected the music to be ethereal, transcendental, beautiful. But they were also these great songs that got stuck in my head!” ~M.M., fan

“Once again there is another release from this wonderful musician. Having bought her first two albums, Nymphya’s newly released CURIOS EP was a must to have. Not only is the music cleverly and skillfully produced but the artwork is perfect, too. The new tracks do not fail to disappoint, especially Liminal which is so atmospheric with a Jeff Wayne feeling in places. Play this, and be taken on a musical journey you won’t regret. Perfectly produced with wonderful vocals. Nymphya always delivers! ” ~ J.L. fan

“If you’re not already a fan, you will be but if you are then I think the real story, as it were, is the new stuff. I never ever look to an artist with any expectation that they will up their game or outdo their previous entries but for my money, Nymphya has anyway… There’s nothing for it but to close your eyes, sigh, and say oh yes, oh yes. I feel confident that will be your reaction to the CURIOS EP“.~ D.M., fan 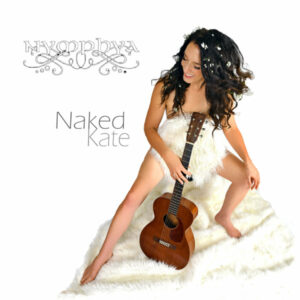 “The CD arrived Saturday !! Those covers far exceed my expectations!! After several listens, I can honestly say as an avid Kate Bush lover, that your interpretations have
superceded those of Kate, And that is a very hard thing to do!!!!….100% better than I ever thought possible.” ~ T.A., fan

“I am a huge Kate Bush fan. I find her music moving and haunting. I approach those who attempt to cover her music with deep skepticism. Seriously, how could anyone do what Kate has done? There have been some ultimate failures and some so-so attempts. What impresses me about this album is the attempt to stay true to movement of the music. Read more about I am a huge Kate Bush fan. I find herNo one can ever truly “cover” Kate, but those who understand Kate’s emotional connection to her music seem to be able to grasp that within their covers. The acoustic covers here give way to the lyrics and allow the words to flow. I am impressed with the cover album. No alternative motives here, just someone paying homage to Kate. Bravo.”  ~ E.C. , fan

” I appreciate when something is done well. When an artist truly loves what they’re doing, it shows. This shows your love for these great songs and Kate. Your thoughtful and beautiful versions of them is a great way to demonstrate your talent and a true tribute. You look for the beautiful and mystical and it is definitely reflected in your music. That is why it’s a pleasure to support you.” ~ G.P. , fan 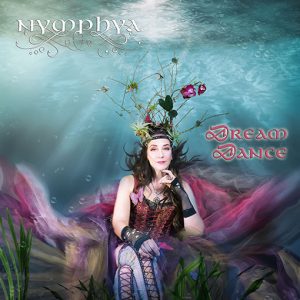 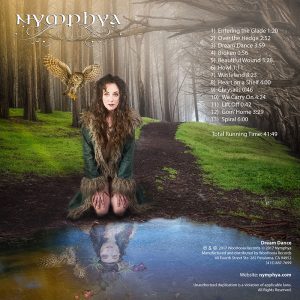 “The packaging is stellar;  I love the lyric book, and the artwork.  Nymphya has delivered in spades with this album. I will encourage my listeners to hear this through headphones. . . We have ourselves a celestial new age goddess” ~ Steven Davies-Morris, Deep Nuggets Radio

“With this album, Nymphya has created an integrated musical experience with a beginning, middle and an end. Put the music on, and then sit back and listen, and you will soon have grown to love it, to crave it, to want to live in it. Nymphya creates a world that you can only appreciate by totally inhabiting it. This album has a beautiful, unique, consistent musical and emotional vision. . .she’s just so versatile and able to infuse each song with its own particular tone and timbre, that she sounds like three or four different singers all rolled into one. This is perfection at work. We may have waited six or seven years for this album to become reality, but it is certainly worth the wait. You get so swept away by the poetic beauty of the melodies, atmospheres, and moods that you forget about all the sweeping and genial electronics being applied in the musical arrangements, which in itself is a massive feat. What can more I say about this beautiful woman with a beautiful voice that hasn’t already been said? Breathtaking vocals, deeply stirring music, all impeccably produced. In a word – Spellbinding!”  Staff, TunedLoud


“In a musical climate filled with re-hashed,cookie-cutter songs, finding an artist brave enough to follow their own path can be tough. When you do, it’s like a breath of fresh air. Enter Nymphya. who has put forth an album that defies all conventional labels. . . a journey deep into the soul and psyche. Written, produced and performed mostly by (Nymphya) herself, she pushes musical and melodic boundaries, keeping the listener both entranced and curious. While one may draw comparisons to artists like Kate Bush, Tori Amos and the like, Nymphya travels a different road, with un-expected turns and twists.  GRADE:A+  Marc Farr, Rock and Roll Infinity

“What strikes the listener upon first encounter with Dream Dance is that it is at once challenging and accessible. Its comforting warmth is full of unusual juxtapositions and unexpected flashes of darkness. The vocals on Dream Dance are pervasive and powerful, yet nuanced and affecting . . . An ambitious and well-crafted work, which provokes as much as it soothes. Sonically what has been created here sounds unique, an admirable accomplishment in and of itself. . . It’s hard to think of anyone apart from Kate Bush who could deliver a line with such twisted emotion and authenticity. . . It asks much of the listener and warrants repeated visits . . . DREAM DANCE deserves to be heard.” ~ Chris Wheatley, Rawckus Magazine

“Spectacular. . . eclectic but not disjointed, musically fascinating, gripping and moving.The brief soundscapes are little gems of complexity. I think Broken might be my favorite. I have different images in my head every time I listen to it. Howl is also utterly amazing. Such a spacious mix, big and mysterious. And Chrysalis with the bells and plunky strings. Egad. Those miniature tracks are skillfully built, and placed in just the right places. What a spectacular idea. The vocal mix on Wasteland is especially brilliant. That track may be my favorite for that reason, although it’s very hard to pick just one. This is a truly extraordinary accomplishment and an amazing CD from start to finish.” ~ David Gordon, Author, Singer, Guitarist


VISIT THE SHOP TO ORDER 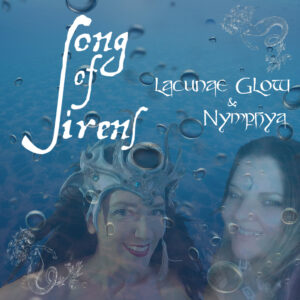 Released March 24, 2019, this Cinematic Art-Pop / Chillwave track ‘Song of Sirens’ explores the euphoric and ethereal nature of the feminine aspect that draws their partners into intimacy, diving deep into the metaphoric ocean of emotional connection, with mermaids representing the protagonists. Nymphya partnered with Australian producer Lacunae Glow for this special single release, and focused on creating haunting and beautiful siren vocals, blending with each other and panning them in the mix to surround you as you get absorbed into their underwater, otherworldly place of beauty, and ultimately, peace.

TunedLoud wrote:  Her music is stunningly beautiful – layered, clean, crisp, and dreamy, yet succinct. Her voice pierces the sound spectrum with pure crystalline force in a chilling hymnal-like aura that paints colorful strokes.

As with most songs that have such captivating appeal, `Song of Sirens’ isn’t an accomplishment strictly because of its words, voices and music, but because of the way that all the pieces fit together with those elements. This recording is a great example of how being generous with one’s music can come back in ways one might never expect. The to and fro recordings, between continents, which lasted 6 months, plus the combined vocal and musical skills of Nymphya and Lacunae Glow, deliver a rich and glowing arrangement that pushes the boundaries of each artist’s comfort zone.

NYMPHYA’S 2017 Single Release “We Carry On” for the Northern CA Fire Victims.

On October 8, 2017 a series of wildfires broke out in Northern California that became the deadliest wildfires in California history, killing 43 people, destroying 8900 structures, and forcing 90,000 people to evacuate, ultimately leaving 15,000 homeless once the fires subsided.

These are people in Nymphya’s community, and this single release was dedicated to the victims of the 2017 Sonoma County Fires.

50% of each download went to Sonoma County Fire Relief .

“I thought it would be cool to let you know a little bit more about me since I’m pretty sure if you’re into Art Pop/Experimental/Bohemian type music, we probably have more than just a few things in common. . .”

The Making of: Dream Dance – Nymphya

“You never know from where inspiration will spring. . .”

The Making Of: Over the Hedge

“I conceived of Over the Hedge initially as an overture; a launching point, and its original title was Fly, connoted by the soaring, high vocalese.”